We did surveys in 24 villages in two weeks and all-in-all we are very pleased with how things went. It is also safe to say that we have a much better understanding of the dialect situation among the Bakoum. Here are a couple highlights:
Reasons Why I Love my Job
Dave and I had a great time working together. We would call the chief of the village ahead of time and ask him to designate someone whose mother and father were Bakoum (and who had all their teeth) that we could meet with upon our arrival. Generally this person was waiting for us when we got there, we asked them thee 200 words, gave them an update on the project and then concluded by recording a traditional story they told in Bakoum. We also tried to do a lot of our introductions in Bakoum, and they were very pleased with that.
In one dark, mud hut that we were sitting in, I looked up and saw an enormous dead (?) spider hanging over Dave’s head. We just ignored it and continued with our survey. When we got for the word for “spider” and pointed to a picture of it, the owner of the house looked at the spider hanging over Dave’s head and more-or-less said “Well would you look at that! We’ve got a real one right here!” On a separate occasion, we had chickens that kept coming into the house we were working in and making so much noise that the lady of the house had to chase them out. 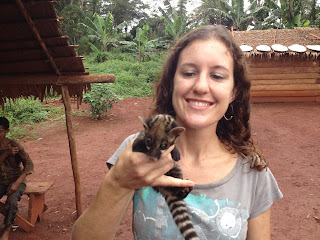 And my ultimate favorite animal story from the survey is when we arrived in one village, we were greeted by a group of rowdy people carrying a baby civet (our neighbors call it a chat-tigre). So, I held this little tiger-like creature that I’ve never even seen before (even in books) on my lap during the survey.

All this to say, the survey was not at all dull.
A Variety of Experiences
A common thought process that Dave and I had as we drove away from each village was “wow, these people need the Lord.” In several Bakoum villages the people are tremendously contentious and the streets are filled with hostile arguments. When Dave initially visited one village, he did the survey with one group of people only to have an angry mob waiting for him at his car saying that he was on “that village’s side” and not on their side (there are “sides”?) Dave said that they became so violent that he was afraid they were going to tip over his car or something else quite extreme. At the recommendation of a Cameroonian who was with him, he quickly drove away. This was the village right next to the other one called “the calabash of sorcery.”
Drunkenness is also incredibly prevalent. In one village, I was doing the survey with a gentlemen who kept getting up, filling up shot glasses with some type of alcoholic beverage and drinking it. It was 9 in the morning and the survey only lasts about 40 minutes. Oddly enough, this is the village that also asked us for money at the end. 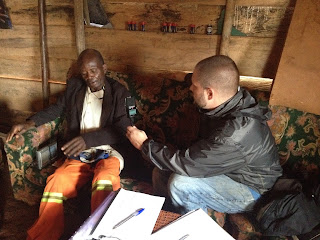 On another occasion a different group of drunk people became so rowdy that we could not do the survey. I asked a couple women to come inside a house with me while Dave stayed at the door and served as the bouncer forbidding people to come in until we were done.

And then, on the flip side, we did a survey with an elderly crippled gentleman, who thanked us very sincerely for coming here to help him and his people. The approval of God is enough for us, but it was incredibly rewarding to hear appreciation from a Bakoum person. It encouraged us to keep pressing on.
Initial Linguistic Conclusions
We have not yet carefully analyzed the words that we collected, but there are a couple things that are striking: First, Bakoum is an extremely “vital” language and does not seem to be in danger of disappearing. Very rarely do they need to borrow French words (aside from modern things like computers and the like) and people speak it in the villages. Also, the people in the villages did not want to talk to us in French (even if that meant they had to suffer through our extremely limited Bakoum). Secondly, there is definitely a majority dialect that is spoken in about 19 of the 25 villages. This will likely mean that the majority dialect will be the one that will be chosen for the Bible translation.
To conclude, this trip was very encouraging because it reinforced in our minds how much the Bakoum need a Bible translation. The people as a whole cannot read in French and thus cannot read the Bible at all, thereby being left in a state of spiritual darkness. This was just the motivation we needed to endure in our studies of the language. 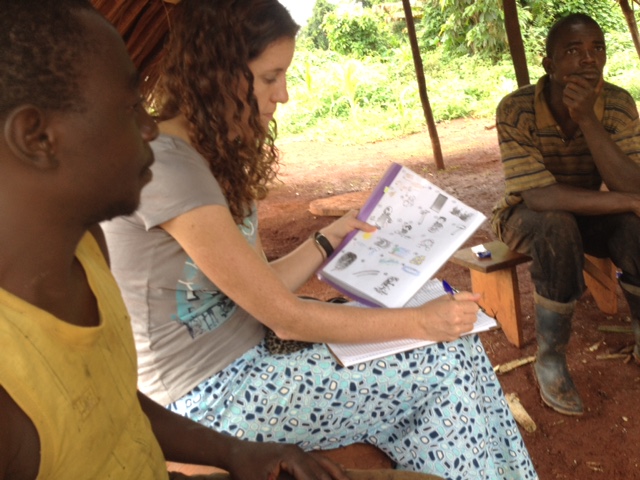