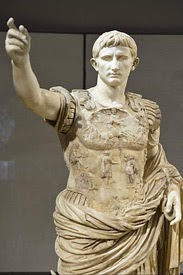 Have you ever heard of Caesar Augustus? His name might be familiar, as he plays a supporting role in the Divine Drama beginning at Jesus’ birth. You can read of him in the Gospel of Luke:

“In those days a decree went out from Caesar Augustus that all of the world should be registered” (Luke 2:1).

It was this decree that led Joseph and Mary back to Bethlehem where Christ was born. Augustus was the Caesar at the time of Christ’s birth and was really the earthly reason that Jesus was born in Bethlehem. But did you know that he was not born with the name Augustus? No, he was born Gaius Octavius to a wealthy, but decidedly not royal family. How then did he end up a Caesar? By adoption.

Adoption in Rome
Turns out adoption was pretty common in the Roman world. Now, it was not the kind of adoption that we are used to today. Julius Caesar did not hop a flight over to Ethiopia and adopt Octavius as a baby. In fact, Octavius did not even know that he was adopted until after Julius was dead. Julius was the Caesar of the Roman Republic while Octavius was growing up and pursuing military training. During the Ides of March (of Shakespeare fame), Julius was murdered by up to 60 aristocrats including some of his friends. Octavius was only 18 at the time and he soon learned that Julius had listed him as the adopted heir in his will. Julius had no legitimate male children and his choice to adopt allowed him to have the power over who would come after him.

This posthumous adoption left Octavius with the right to become Caesar and two-thirds of Julius’ estate. However, his adoptive father’s death led to several civil wars that brought the end of the Roman Republic. It was not until 17 years later in 27BC that he officially became Caesar Augustus at the beginning of the Roman Empire. The title carried with it not only great civil power in Rome, but left Augustus with the status of a god. Apparently, Augustus liked the way that this all worked out because he in turn adopted his successor, Tiberius. In fact, in the first 200 years of the Roman Empire, Caligula, Nero, Trajan, Hadrian, Antoninus Pius, and Lucius Verus all became Caesar through adoption.[1]

When Augustus was adopted he was welcomed to a new life. Though he had to fight for it, he had been given the right through his adoption to become king, even to be considered a god. Being the son and the heir to Julius Caesar meant that he inherited his estate, his title, his privileges and his obligations.

“For you did not receive a spirit of slavery to fall back into fear, but you have received the Spirit of adoption as sons, by whom we cry ‘Abba, Father!'” (Rom 8:15).
and
“He predestined us for adoption as sons through Christ Jesus, according to the purpose of his will” (Eph 1:5).

It is a Christian notion that those who believe in Christ have been adopted by God. And as with Augustus, our adoption comes with an estate, a title, with privileges and with obligations. Did you know that as Christians we will inherit the earth (Matt 5:5), eternal life (Matt 19:29), and the kingdom of God (Matt 25:34)? And though we will never be called king (and certainly not “god”), we are told that we will one day judge angels (I Cor 6:3). Further, as children of the king we are able to boldly approach the throne of grace (Heb 4:16). And all of this wonderful inheritance is ours through Christ Jesus.

Adoption and Obligation
But like I said, this inheritance does come with obligation. Paul says in Romans 14:

Our adoption means that our lives are no longer ours. We belong to Christ and we belong to his kingdom. Augustus was a brilliant leader and he spread the Roman Empire far beyond the borders of his father. In fact he ruled with such power and confidence that he took “Imperator” to be his first name, which means “victorious commander.” He found great power and conquering confidence in the name Caesar. We come to this world with an even greater name. We are heirs of the one who created the whole world. And our Father has commanded us to go into the whole world and spread his kingdom not for the name of a great man, but for his name. Unlike Augustus we have a Father who lives. We have a Father who is with us. And when we spread his kingdom it is because he gives us the strength to do it for his glory.

I said earlier that Augustus played a “supporting role” in the world’s greatest drama. I said that because God had decided that Jesus would be born in Bethlehem and wrote it down around 700 years before Augustus was born (Micah 5:2). Caesar Augustus was a very powerful man, but his role in the most important act of history was small. And for all that he accomplished, the kingdom that he fought for has been gone for almost 600 years. In contrast, we have an opportunity to fill our lives with works to build a kingdom that will never end. We do this not to become God’s children, but because we have already been adopted. We are merely doing the work of our Father. What a great privilege and what a great responsibility!