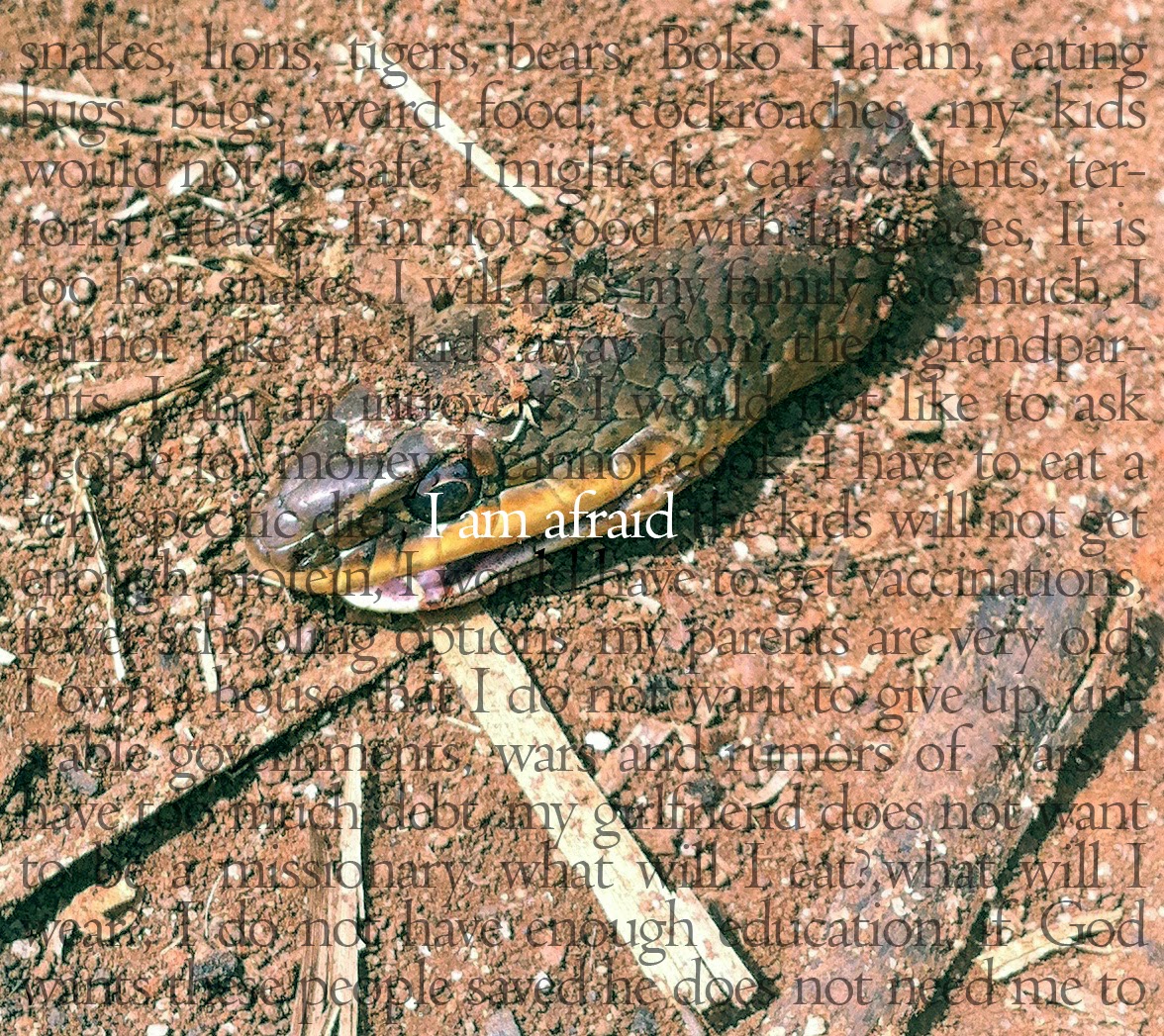 So far since we have been in Cameroon I have: killed three poisonous snakes around our house, spent an entire day carrying water from a well, stopped a man from severely beating his daughter, stopped another man from severely beating his dog, had two guys try to jump in my car for unknown malicious purposes, and watched a baby die. Though all of these things are fairly common place here in Africa, they are also experiences I almost certainly would not have had if I stayed in America. And to be honest, while I do not feel like I have a hard life, I am amazed by how many Christians tell me “I could NEVER do that.” I say that I am amazed, but I spoke those same words thirteen years ago when I first met my missions-driven-now-wife. I was pursuing a career in film and there was no way that I would ever go live in the jungle.

Wrong Assumptions
I have had many years to reflect both on my own heart at that time and on those Christians that say this to me and I think I have recently had a breakthrough. I am reading a book called Sacred Marriage by Gary Thomas that sparked the thought. After discussing some of the troubles common in Christian marriages he says:

“Life is so easy for us today that we risk falling asleep, convinced that it should be easy and that it will always be easy. Then, at the smallest difficulty, we are greatly tempted to turn back to our habitual comfort and we risk therefore circumventing great spiritual opportunities.” (I am actually reading the book in French under the title Vous Avez Dit “Oui” à Quoi? and this is a rough back translation).

Thomas’s point is directed toward marriage: if we start by thinking that marriage should be easy we will try to escape the difficulties that can make it sanctifying. But as I was reading it, I kept thinking about these conversations that I have had with Americans regarding missions. I think maybe we are coming to life with the wrong assumption. As Americans we live in a world where clean water comes out of our tap on demand and an hour power outage during a storm is enraging. It is a world of 24-hour emergency rooms and penicillin and air conditioning. We can even have our groceries delivered to our front door! And I think we get blinded by our Google Glass culture into thinking that life is supposed to be convenient, comfortable, and easy. Even when we think of Africa, we think how horrible it is that people do not have our medicine and conveniences and we try to figure out ways to help because we think that they deserve easy lives.
To his disciples Jesus said, “I have said these things to you, that in me you may have peace. In the world you will have tribulation. But take heart; I have overcome the world” (John 16:33). First thing that I notice here is that Jesus wants us to have peace. But the peace that he is calling us to is peace in the midst of tribulation. The tribulation is a given. This life is actually not supposed to be easy. The New Testament is full of encouragements and exhortations to those who are suffering because that is what is considered the normative Christian experience.
The Example of Christ
What’s more, we are called as Christians to follow the example of Christ. And what is the example of Christ? Paul tells us that Jesus,

“Though he was in the form of God, did not count equality with God a thing to be grasped, but emptied himself, by taking the form of a servant, being born in the likeness of men. And being found in human form, he humbled himself by becoming obedient to the point of death, even death on a cross” (Philippians 2:6-7).

There is a reason that Jesus is called the “suffering servant.” He came to the earth to both suffer and to serve. That is the example that we are called to follow. We are called to suffer and to serve.
Now I am the first to say that not everyone should be a missionary. In fact, if everyone was a missionary, I could not be one! We need those of you who support us. Nor do I think that the only way to follow Christ’s example is to become a missionary. BUT I do write this as a challenge to those who would say “I could NEVER be a missionary.” Who are you thinking about when you say that? Yourself? Because if you are thinking about yourself, you are right. We are weak creatures that often cannot help but be distracted when we should be worshipping. But I wonder if we might change the way we are thinking if we shifted our focus to Christ. Both Paul and Peter call us to have the same mind as Christ. Here is what Peter says,