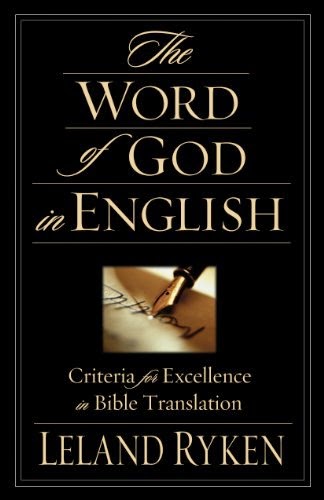 I mentioned before that from time to time I would like to engage in this blog with translation theory. Today I am going to engage with an article titled: “The Theology and Ethics of Bible Translation” by Leland Ryken. This article is the seventh chapter in his book The Word of God in English, which can be downloaded for free in it entirety HERE.

Positive Elements
Ryken very helpfully makes the point that theology matters. There is no such thing as a Bible translator who approaches the text in neutrality. Our theology shapes the words that we choose and it is even possible to categorise different translations by the theology of their translators. For example, the translators of the CEB (Common English Bible) chose to translate Genesis 5:20 as “God produced something good from it” instead of “God meant it for good.” This decision betrays something about their theology which may not permit the idea of a God who ordains bad things to happen.

Ryken also counsels that “translators need to be alert at every point to how a given rendition of a word, phrase, or passage might be construed theologically” (p 124). This is a very weighty charge and something that we as translators take very seriously. We are not just translating books or documents. The translation that we produce will be considered the very Word of God by those reading it. The words that we choose will change the way that people look at God and at his actions in history. Theology will be shaped by our choices, for better or for worse.

He also focuses on three aspects of theology that are extremely important in the life of a Bible translator. “They are the authority of the Bible, the inspiration of biblical authors by the Holy Spirit, and the verbal or plenary (“full, complete”) inspiration of the Bible” (p 127). I have no doubt that a translator must believe that the Bible is authoritative and inspired in order to make a faithful translation. Without these theological truths the Bible is just another book.

Negative Elements
I love Ryken’s emphasis on theology and on the reliability of the Scriptures. However, I would like to offer a few questions in regards to his views. As a disclaimer, I do not claim to know the answers to these questions, but I will raise them all the same.

1. What about word order?

Ryken takes a good deal of time to define and defend what is called “plenary inspiration.” That is to say, “God inspired not only the thoughts of the biblical writers, but their words” (p 131). Standing on this position the translators of the ESV claim that it is a translation that “seeks as far as possible to capture the precise wording of the original text” (quoted on page 134, italics Ryken’s). In contrast, translations that are considered “dynamic equivalent” seek to translate the “meaning” or the “thoughts” as opposed to the specific words. Ryken claims that such translations are not faithful to the original text and that it is even unethical for these translations to claim to be the Word of God as they are not translating the actual words (pp 135-136).

This makes me wonder, why would we say that the words themselves are important and not the word order? God’s inspired Word in Hebrew was that the subject comes after the verb, so should we not leave it this way in our English translations? And what about the punctuation (or lack there of)? If we say, as Ryken does, that “We can rest assured that the Bible was written in the form that God wanted us to have,” (p 129), why translate at all? Why not go the route of Muslims with the Koran and demand that it is only read in its original languages? After all, God did inspire the text in Hebrew, Greek and Aramaic with their respective grammars and syntaxes. Should we avoid the task of translation altogether?

2. Do we translate words?

Ryken glosses over, though acknowledges, that most (if not all) translators of English translations believe in the authority and inerrancy of the Bible. To this he replies that their translation philosophy is merely inconsistent with their belief. But I believe that there is another way to look at it. The truth is, words actually have little meaning when taken by themselves. For instance, if I was to ask you what the word “set” means, you might be thinking about what the sun does every evening. Or perhaps the “chess set” that you just gave to your son for his birthday. The word “set” can mean many things, and we need context in order to really understand how it is being used. In the same way, in order to understand the Word and translate it correctly, we cannot just translate word-for-word. If you have ever used Google translate you know that this is true. Every seminary Greek professor knows that words have a range of meaning, and we have to read and understand the flow of thought in order to correctly translate an individual word. Thus, meaning is not necessarily found at the word-level but at the sentence and paragraph level. If this principle is true, is it the same as translating “thoughts”? How could we avoid translating this way?

3. What about when it is not so easy?

As a general critique, it seems to me that translation is harder than Ryken made it seem in this article. It is impossible to make a translation without changing, adding, and removing words. Further he is talking about translating into English, a language with one of the largest vocabularies on the planet. We have literally hundreds of thousands of words to choose from when we translate something into English. What do you do for African languages that do not have “color” words other than: red, black, and white? How do you translate the word “hope” when your target language does not have that word? Would it deny inspiration to use a phrase such as “looking forward with joy” or something like that? This is not entirely fair, being that the title of the book is The Word of God in English, but Ryken claims that his translation theory is grounded in the Scripture and that dynamic equivalency denies inspiration. If this is true, then I have to apply what he is saying to our translation endeavors as well.

Conclusion
All this to say, I found Ryken’s article to be interesting, thought provoking, and really frustrating. I believe wholeheartedly that the Bible is authoritative and inspired and I am confident that this will play a huge role in our translation. However, like Grudem’s article before, I find his arguments too simplistic and neglecting the reality of the challenge of translation. It is also discouraging to see him write off those who disagree as having bad theology or at least being inconsistent. It is a good principle to seek to be faithful to communicate what the original authors wanted. However, we must make a translation readable in the target language, which means necessarily that we use different words (Jesus did not speak English, after all). The task of translation is to make sure that you are using the right words. I hope that as I review articles here it will make our readers think about the translations they use, but also pray for us as we are looking forward to a very difficult task. I would really love to have Ryken come and spend 6 months working on translation with us in Cameroon. I wonder if he would feel the same frustrations as I do.