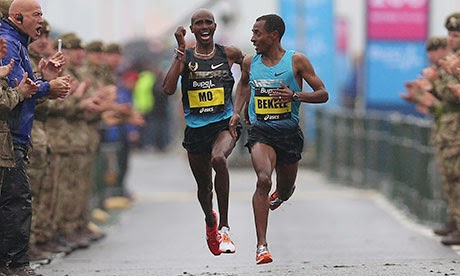 After several months of neglecting my morning jog due to cold weather, this past week I decided to put on my running shoes once again. The first morning out, it was cold and the streets were empty except for a few men in berets coming to buy their morning baguettes. I was panting and struggling due to the fact that I have gotten a bit of out of shape during the winter months. I was just trying to put one foot in front of the other. Suddenly I looked up and saw a rather large French woman, still in her pajamas, looking right at me from her second floor apartment. A smile lit up her face and she began clapping her hands and cheering for me. “Bravo, bravo!” she shouted. With this affirmation, my spirits were lifted and I finished my jog with increased speed and relative ease. It is amazing how pain can be diminished when you know someone is watching you and cheering you on.
This kind woman reminded me that there are clouds of witnesses surrounding the Christian, even in times when he or she may feel like he is totally alone. I am persuaded that the awareness of their presence is one of God’s means of grace to cause the lonely saint to endure.

The Testimony of the Saints

When we read Hebrews 11, we find that there truly is nothing new under the sun. Every struggle that Christians endure today has been endured by the saints of old. In this chapter we read about Noah who feared a coming judgment and thus chose to accept rejection from those in his culture as he built a huge boat. Later, we observe Moses’ parents as they defied the laws of an unrighteous government. Because of their sacrifice, their son Moses had the riches of a kingdom. However, he chose to refuse to be called the son of the King’s daughter and walked away from the thrill of living for vain pleasures. He chose instead to follow Christ and be mistreated. The Israelites understood what it was like to live under an oppressive regime. Then they were called on to trust God when he told them to destroy an enemy city by walking around it. They understood what it was like to follow God when his methods did not seem to make sense. David felt the heartbreak of the betrayal of his own son and the disgust and sorrow of having sexual abuse occur in his family. And others were tortured and were without the basic necessities like food and clothing.
So how can their stories comfort for the lonely Christian?

We Have Ammunition to Reject the Lie that We are Alone

Hebrews 12:1 tells us that we are surrounded by a great cloud of witnesses referring to the list of heros in Hebrews 11. This record of people testifies to the fact that others have indeed experienced what it is like to have their families torn apart, what it is like to look at the pleasures of sin and to walk the other way, what it is like to not really belong anywhere, what it is like to endure in obeying the Lord even when that comes at a cost. These testimonies prevent us from walking down the road of self-pity where we get out a carton of ice-cream and meditate on how no one understands oursufferings. It also reassures the Christian that even if there is lack authentic relationships at church or in our marriage, we are nonetheless surrounded God, angels, and saints who are more-or-less cheering us on.

And the voices of those who surround us are saying that we need to endure in the faith. “Therefore, since we are surrounded by so great a cloud of witnesses, let us also lay aside every weight, and sin which clings so closely, and let us run with endurance the race that is set before us” (Heb. 12.1). The world, flesh and the Devil tell us to drown our feelings of loneliness in the comforts of sin. Such as: drinking a little too much, fantasizing about a different life, looking at pornography, the distractions of materialism, and so on.

And yet, as we run the Christian race and hear the temptation of the Devil that God would never forgive us for that sin, we look to our right and see King David who was forgiven of adultery and murder. And so we take on more step.

Still we long to give into a life filled with alcohol, clubs and shallow conversations, and yet we look to our left and see Moses who was given grace to walk out of a palace to go wander in a desert for forty years. And we take another step.

We are so fed up with the mundane daily grind of correcting our children, seeking to be content in God, and honor our bosses at work. Then, out of the corner of our eye we see Noah holding a sign that says, “Think your life is mundane? I built a boat in preparation for a flood that did not come until I was 600 years old.” After reading that poster we take several steps forward.

But then there is still that nagging feeling of rejection. And yet, through the crowd we see Joseph holding a picture of when his brothers sold him into slavery. “If the Lord can sustain him through that, then he surely can sustain my faith through what I’m feeling” we think as we take another step.
And yet the most encouraging thing that we hear the cloud of witnesses shouting is that the finish line is near.

We can Fantasize about the Future

What sustained the saints of old and what sustains Christians today is that there is an actual city that is being prepared for the family of God that is just on other side of the finish line. What gave Abraham the ability to leave everything was that he “was looking forward to the city that has foundations, whose designer and builder is God.” He knew that a city built by God is so much better then all the comforts of a familiar hometown on earth. Moses left the temptations of sin because “he considered the reproach of Christ greater wealth than the treasures of Egypt, for he was looking to the reward.” Moses was seeking a pleasure that was better then the pleasures he left behind. He was able to leave a beautiful palace because he knew a better one was coming.

The believers in the Old Testament did not just loosen their grip on the things of this world, but instead they let go of something lesser only to hold more tightly onto something better. And their preoccupation with what they had taken hold of was what enabled them to endure. And so for us, let us follow in their example and let our daydreams be about the perfect city that awaits us all. When we do this, we will surely be able to endure.