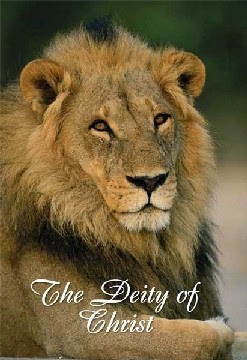 Unexpectedly we have had 3 house calls by Jehovah’s Witnesses since we arrived in France. We actually were not able to talk to them any of these times (the first two times because we did not speak French well enough and the last time because they came at a bad time). But considering these encounters got me thinking about the deity of Christ. Jehovah’s Witnesses teach that Jesus is not God, nor that he claimed to be God. Instead he is the archangel Michael and was God’s first creation.

I have found that this is actually a pretty common talking point, especially for cults like Mormons and Jehovah’s Witnesses. “Jesus was a good teacher, but he never claimed to be God and we should not try to make him more than he was.” There are a lot of problems with this worldview, and Jehovah’s Witnesses start with very different assumptions. But I am going to begin with the assumption that the Bible is true and not corrupted throughout the centuries (see: FAQ: Is the Bible Reliable?). And I want to spend time in this post asking the questions: Did Jesus claim to be God? And does it matter?

Did Jesus Claim to Be God?
If you do a search on biblegateway.com for “I am God” you will find 10 passages where God says this exact phrase; none of which come from the mouth of Jesus. Well, there you have it. End of story, right? Not exactly. It is a fact that we have no recorded instance of Jesus saying the phrase “I am God.” However, Jesus said pretty much the same thing in John 8. The context: Jesus was in the midst of a heated discussion with Jews who claimed that they did not need to be freed as they were never slaves, but were instead children of Abraham. Jesus had a different idea, namely that these unbelieving Jewish leaders were actually children of the Devil. Since they referenced Abraham Jesus jumped on the opportunity to say,

“Your father Abraham rejoiced that he would see my day. He saw it and was glad.”So the Jews said to him, “You are not fifty years old, and have you seen Abraham?” Jesus said to them, “Truly, truly, I say to you, before Abraham was, I AM.” So they picked up stones to throw at him, but Jesus hid himself and went out of the temple” (v. 56-59).

There are three facts recorded in this dialogue that point to the fact that Jesus claimed to be Christ. The first is that Jesus claimed to exist before Abraham, “Before Abraham was, I AM.” They Jewish leaders picked up on this because they said “You are not 50 years old and you have seen Abraham?” At the very least one could say that Jesus was claiming to be older than he appeared (around 2000 years old). There could be other explanations (like he was really the archangel Michael for instance). But what is funny is that Jesus did not say, “I existed before Abraham.” This leads to the second point: Jesus claimed to be I AM. Not all translations capitalize I AM in this passage, as I have done here. But I think that it is really clear. The phrase itself is not grammatically correct unless we view I AM to refer to the divine name. Jesus is using the name that God Himself used in Exodus 3:

So, according to this passage in Exodus, God told Moses that his name was I AM. Then in John 8 Jesus says that he is I AM. So, did Jesus say that he was God? Absolutely. This is evidenced further by the last part of the John 8 passage where “they picked up stones to throw at him.” This is more explicit in John 10 after Jesus said “I and the Father are one.” The Jews picked up stones again and he asked for what work they were wanting to stone him. They replied:

“It is not for a good work that we are going to stone you, but for blasphemy, because you, being a man, make yourself God” (33).

Even if Jehovah’s Witnesses do not understand it, the Jews understood it just fine. When Jesus said things like “Before Abraham was I AM” and “I and the Father are one,” he was claiming to be God. This was something the Jewish leaders considered to be blasphemy. And of course it would be blasphemy unless Jesus was in fact God.

Does it Matter?
Sometimes when I raise this as an issue I get the you-are-being-theologically-nit-picky look. I mean, after all the Jehovah’s Witnesses and the Mormons say that they trust in Jesus for salvation, isn’t that enough? A few years back someone questioned the then President of the Mormon church in regards to whether or not he believed in the traditional Jesus. Gordon Hinckley responded by saying:

The deity of Christ is not a theological concept for nit-picky professors. Instead, the Bible presents us with the man Jesus Christ, who was and is the God of the universe. And we are invited to come to him with people from every tribe, tongue and nation and bow and worship him as God. Jesus is not merely a name, or a theological construct. Jesus, God Almighty, is the one that will one day return to call his elect home, and to destroy all those who trust in anyone else. Even if their trust is in another man named Jesus.