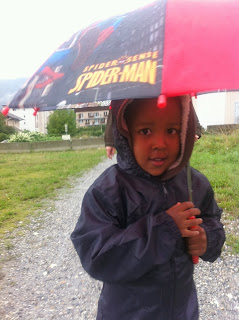 Picking up our kids from school is always an adventure. After a brisk bike ride from our campus to theirs we join the French version of the running of the bulls: a vast ocean of the parents and caretakers of 120 three to five year olds flooding through a single pair of double-doors. Being responsible for four of those children, all in separate classes, we cannot merely ride the back of the wave. So we squeeze through, call back “Excusez-moi” and head for two rooms each. Then comes the fumbling French as we try our best to understand how our kids disobeyed and to explain that we do, in fact, correct their bad behavior in our home. We then wrestle the kids out the same double-doors as they point to the paper mâché witch in the hallway and remind us that they are not supposed to touch the “bad woman.” The trek home is a bit more peaceful, literally a walk through the park, with four young children and two 7-speed bikes…that is, on a normal day.

But Monday was not a normal day for two reasons: 1) Stacey had a meeting with a language partner and could not come with me to get the kids, and 2) it was raining. So instead of each of us with two children and a bike, I had four children, a bike, and four child-size umbrellas. At least, I consoled myself, it is not raining very hard. The school itself was pure chaos. For whatever reason I feel a great deal of pressure to get the children quickly and by the time I arrived at Elias’ room it was clear that he was the only remaining child. I was already feeling bad when he waddled out carrying his wet pants in a paper bag in one hand. I mouthed the words “I’m sorry” to the teacher (forgetting that she does not speak English) and headed for the benches so I could put on the kids’ rain jackets and tuck their pants into their rain boots. Finally all five of us headed out the front doors to a chorus of “bad woman” floating up from beneath two Spiderman and two Pink Princess umbrellas.

Being a father that would rather not bathe all four of my kids when we get home, I did my best to steer us around the puddles as we walked through the park. Being children, they did their best to make it look like an accident each time they jumped in. About mid-way through our journey home “the windows of heaven were opened” and biblical amounts of rain attempted to fill up the valley in which we live. I tried my best to get the children to hurry at this point, which reminded me of my previous efforts to encourage our cat into a pet carrier. The more intensely I wanted them to go forward, the more likely they were to be in reverse. I was on task, ready to get home and out of the rain. My children, however, were experiencing the wonder of full immersion in a rain storm for the first time. Our priorities could not have been more different.

I decided to cut through the supermarket parking lot under the awning of the building to avoid at least some of the rain. While we paused for a moment as I plotted our next steps I felt a tug on my rain soaked jeans and looked down to see my lovely daughter looking up at me. She spoke in a whisper hard to hear over the sound of the rain beating down on the pavement.

At the time I thought, “Of course it did Makyra, we are under an awning.” But for her this was astonishing. We were standing in a parking lot, in a world covered in rain, but she could not hear it hitting her umbrella anymore.

The truth is that there is little that astonishes me these days. Sure, I live in France and people speak in a different language. But rain is still rain, grocery stores still sell broccoli, and standing under an awning prevents the rain from falling on me here just as it did in the States. But I am realizing that in the midst of my busyness and adult priorities it is easy to miss out on the wonder of the world around us. We live on a spinning ball of dirt that is just close enough, but not too close to a stationary ball of fire. Our giant dirt ball has on it an enormous amount of salt water which, when heated up by the fire ball, evaporates (leaving the salt behind) and soars upward into the heavens. There above us it accumulates and then falls back down and “waters the earth, making it bring forth and sprout, giving seed to the sower and bread to the eater.” And we call that rain, which is boring and normal and hardly worth our notice. And instead of crying out with the psalmist, “The heavens declare the glory of God,” I usually just say, “Hurry up and stop splashing.”

So, if my thoughts ever make their way out into my actions, today when I see wonder in the eyes of my kids I will take a moment and try to experience it too. Try to experience the majesty of the Lord through new eyes. As I sit writing this right now I am looking out my window at the incredible sight of the French Alps. Instead of just passing by these mountains that I have seen everyday for months, my attention ought to be drawn to their beauty and the beauty of the one who made them. Moses reminds us in Psalm 90:

Before the mountains were brought forth,
or ever you had formed the earth and the world,
from everlasting to everlasting you are God (Psalm 90:2, ESV).

Perhaps today I can be more like my children. Perhaps I too can marvel at all of the amazing things around me instead of just rushing around them. Perhaps then I can teach my children to give glory to God by doing it myself.