In my daily devotions I have been reading through the Gospels and I was struck by the way Christ responded to what we would call “seekers.” Three people approached Jesus, seeking to follow him, and he responded in a surprising way to all three:

Seeker 1: As they were going along the road, someone said to him, “I will follow you wherever you go.” And Jesus said to him, “Foxes have holes, and birds of the air have nests, but the Son of Man has nowhere to lay his head.”

Seeker 2: To another he said, “Follow me.” But he said, “Lord, let me first go and bury my father.” And Jesus said to him, “Leave the dead to bury their own dead. But as for you, go and proclaim the kingdom of God.”

Seeker 3: Yet another said, “I will follow you, Lord, but let me first say farewell to those at my home.” Jesus said to him, “No one who puts his hand to the plow and looks back is fit for the kingdom of God” Luke 9:57-62.

Three seekers, three responses, but in the end they all elicit the same response from Jesus: count the cost. The first seeker says that he wants to follow Christ, and Jesus lets him know that it is going to be hard. If you follow a regular man you will probably know where you are going to end up, but not so with Christ for “the Son of Man has nowhere to lay his head.” Jesus responds to the seekers request by calling him to consider the fact that following Christ means following him even in hardship, and in this case homelessness.

The second seeker makes a pretty reasonable request: he wants to follow Jesus, but after he buries his father. The ESV Study Bible has informed me that “Burial at this time in Judaism often involved a year-long period,” which at the very least shows that he was not willing to immediately follow Christ. Jesus confronts this seeker with the reality that the Kingdom of God takes precedent over our earthly families.

The final seeker in this passage is in much the same situation as the second, he just wants to go back and say “goodbye” to his friends and family. Jesus does not even allow for this, but calls him to immediate and complete submission to himself.

Can you imagine what would happen if we evangelized like Christ did in this passage? How many people would really make the commitment if, when they indicated interest, we reminded them of the ways in which following Christ would cost them the most? Thinking through this reminded me of an illustration in Ray Comfort’s sermon “Hell’s Best Kept Secret“where a man in an airplane…

…is given a parachute and told to put is on as it would improve his flight. He’s a little skeptical at first because he can’t see how wearing a parachute in a plane could possibly improve the flight. After a time he decides to experiment and see if the claim is true. As he puts it on he notices the weight of it upon his shoulders and he finds that he has difficulty in sitting upright. However, he consoles himself with the fact that he was told the parachute would improve the flight. So, he decides to give the thing a little time. As he waits he notices that some of the other passengers are laughing at him, because he’s wearing a parachute in a plane. He begins to feel somewhat humiliated. As they begin to point and laugh at him and he can stand it no longer, he slinks in his seat, unstraps the parachute, and throws it to the floor. Disillusionment and bitterness fill his heart, because, as far as he was concerned, he was told an outright lie. 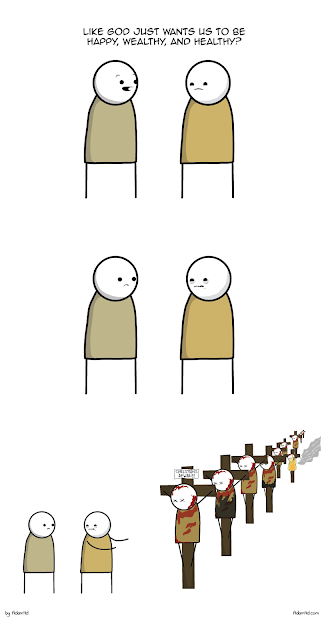 before we give them the Good News of Jesus Christ. I would like to make a different application. The reality that we face in the Church today is that many people walk away from “commitments” to Jesus, sometimes rather quickly.

I believe that one of the reasons for this is that we may more be hesitant to call people to count the cost then Jesus was.  If we preach the Good News, even explaining to people that they are all sinners, without telling them that it will cost them everything, it is like we are casting our seed into a thorn patch. At first, they may be able to cling to what we told them (like the guy on the airplane).

But then they begin to realize what Christ meant when he said “I have come to set a man against his father, and a daughter against her mother, and a daughter-in-law against her mother-in-law. And a person’s enemies will be those of his own household” (Matthew 10:35-36). The new convert is starting to feel a little opposition from his family. And then this Gospel seems more like a bait-and-switch. He thought he got a “get out of Hell free card” but in reality he received a life-transforming, suffering-inducing, hard-life-creating call to sacrifice. And the thorns choke out any life out of his commitment.