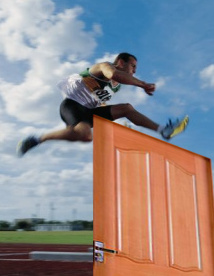 If you have read our most recent newsletter, you know that upon arriving in France we realized that the school that we chose is not going to work out. I have to admit, it was pretty bewildering. I mean, we found cheap plane tickets, got our visas on time, received a free ride to the airport, survived 12 hours in the air with four young children, all of our bags made it to France…and the school is closing and cannot offer the hours they promised. How does that happen?

You might think we should be discouraged. And to be honest, if you were to ask the week after we got to France we would have told you we were discouraged. But, in the last 9 years of pursuing missions, we have learned that God’s plans rarely mirror our own. So we started to look for other options, found another school that is about 30 miles away, contacted them, applied and we are moving tomorrow!

In reflecting on this turn of events I realsized that throughout the years I have often seen Christians that started in the direction of missions, but were thwarted by what they called “closed doors.” Please do not get me wrong, I do think that there are people that should not pursue the international mission field. I believe that the Lord does lead his children, and sometimes that leading takes us away from a particular ministry. And I think that some people are more effective for the Kingdom of God in their home country. But what I have come to realize is that what some people consider to be “closed doors” may actually just be hurdles; stumbling blocks there not to stop us, but to force us to press forward with greater tenacity and dependance upon God.

Please feel my empathy friends. We have endured hardship along this path and we have no idea what hardship is to come. But if you are currently in a place where you are re-evaluating God’s calling on your life because of a “closed door,” would you take a moment and consider that it might just be a hurdle?

Here are some “closed doors” that I have personally seen keep aspiring missionaries from the field:

1. Rejection by a Missions Agency. The Lord has put us in a place where we have known many people who have been rejected by missions agencies. Applying for an agency is exhausting and often involves long applications, psych evaluations and a significant time commitment. So, to go through that whole process to only get a rejection letter in the mail can be crushing. And several times I have heard aspiring missionaries say that this was a clear sign from God that it was just “not meant to be!”

As it turns out, this is not a new phenomenon in the history of Christian missions. William Carey (a.k.a. the Father of Modern Missions) literally begged people to send him to India but for a long time. Yet those would-be senders told Carey that the Lord did not need his efforts to save the heathen. Adoniram Judson (first American Protestant missionary) changed his mind about baptism on the way to Burma and thus lost his financial backing. John Patton was told “you will be eaten by cannibals” when trying to convince people he should be going to Vanuatu. Gladys Aylward was rejected by the China Inland Mission because her academic background was insufficient and they thought she was too old to learn the language. I could literally go on for hours about missionaries who were rejected by organizations who have gone on to change the world.

Though some of us have probably said it, few completely abandon the thought of marriage because of a bad break-up. Brothers and sisters, there are other missions organizations in the world (more fish in the sea?). And many of them are awesome! God may in fact be guiding you away from missions because of the IMB (or CIM, or whatever), but this certainly does not have to be the case. If every person who was rejected walked away from missions we would have a lot fewer amazing stories of God being glorified in the weakness of people like these.

2. Money. For most people pursuing missions means pursuing support raising. And support raising is hard! Exasperating the situation, there is a very common idea in America that if God wants something to happen he will provide the money quickly. For most of us, support raising takes a long time. This can be extremely discouraging. People (even close friends) can be suspicious of you, avoid your phone calls, and sometimes just outright reject you. But reflect with me on a conversation a missionary told me he had on the field with one of his Bible translation helpers:

Though he never came out and said it, the national was coming to the realization that we have had the Bible for generations. And yet this was the first missionary to come to his people. And to what shall we attribute this delay? Not wanting to raise support? Fear of awkwardness? The uncomfortable feeling of asking people for money? Fear of rejection?

There are three truths that spurred us on as we were support raising: 1) God loves the nations, 2) God’s church loves what God loves, 3) God has infinite resources. We had to remind ourselves of these things because they did not seem to be true at times. If you are pursuing missions know confidently you are seeking after something that God loves. As you ask Christians for help, appeal to the heart of Christ that is in your both. And pray to God as the God who owns the cattle on a thousand hills. His delay in giving you funds may have more to do with your need to understand your dependence and less to do with a closed door.

3. Family. As we progress towards Africa, I am very fortunate to have parents that are very supportive. However, many parents are not supportive. I have seen how hard it is for those people who have parents that are not Christians and think it is the craziest thing in the world to go into missions. And it is perhaps even harder for those wo have Christian parents that reject and sometimes even forbid their children to move overseas.
I believe that at times seeking after Christ can look like hatred. Jesus said,

“If anyone comes to me and does not hate his own father and mother and wife and children and brothers and sisters, yes, and even his own life, he cannot be my disciple” (Luke 14:26).

When it comes down to it, God’s Kingdom is worth more than my kids, and my mom, and yes, even my own life. And God has actually told us in his Word that following after him will sometimes divide families. Perhaps through time and prayer you can pursuade your family members to approve of missions. But even if they do not, remember: loss of family is not something new to the life of the Church. Rather than redirecting your steps through your family, God may be calling you to trust him and lose everything.

In Sum
I have come to realize that I encounter “closed doors” nearly every day in my life. But when my car does not start in the morning, I do not assume that it the leading of the Lord for me to not go to work. No, in truth we live in a fallen world. And in this fallen world things act…fallen. Cars do not start in the morning. Passports get lost in the mail. Mission agencies reject us. Parents get mad. Our kids get sick. And when these things happen we pray, ask for help, and find a way to press forward. My challenge today for those pursuing missions is to FIRST consider stumbling blocks to be hurdles and seek to overcome them. There has never been a missionary that made it to the field without changing plans a million times. And should the Lord in the end direct your steps away from missions, let it be at the end of our excertions instead of at the beginning.

My goal here is sincerely to be helpful and encouraging. I want to think rightly about missions and the stumbling blocks along the way. And I want my friends to know that through these 9 years of ploughing to get to the mission field the Lord has shown his power in our weakness and inability and in the failures of our plans. And I am begging him to continue to do that as we seek to be flexible and in his strength to jump over whatever hurdles may be in the way.