Today was one of the happiest days of my life. Our 7 year old son Kaden has announced to a large, boisterous crowd of people that Jesus Christ was his Savior and Lord! I invited pretty much everyone I knew to his baptism and was overjoyed to see friends steeped in animism walk into church to listen to Kaden read his testimony. We listened to a sermon and then people from our church walked through the dusty streets singing praises to the Lord all the way to the river. It was an incredibly joyous time. I praise God for his work in Kaden’s life and pray that he endures and bears much fruit. Here is a (long) letter that I read to him today after his baptism…

To my beloved son on the day of your baptism,

I once heard in a sermon a beautiful story of a great king. This great king was wise, wealthy, and benevolent. Everything he desired, he had. One day he was out with his entourage in one of the poorer parts of his kingdom when he saw a dirty orphan street boy. This noble king had compassion on the young boy and called for his servants to bring him to him. He looked into the eyes of this little boy, and even though the boy was nothing to be desired, this kind-hearted king made a public declaration:

There was a hush among the crowd as this sheepish, stunned child was escorted to the royal castle. It was there at the castle that the king started to treat this once rejected street boy as his own son. He was clothed in clean clothes, he was taught how to read and write, and he was put through rigorous training to prepare him to fight in war. When the child was tired from all the demands put on him as the prince, his father reminded him of the great to calling to which he had been called. He was no longer a child playing with trash in the street but was now the child of a king who would one day be called upon to rule the nation.

“You are my son” he said, “now live up to what you have already received.”

Kaden, you are this little boy. You, like the rest of us, were dead to God and playing in the trash of your sins. But the great and benevolent King of the universe poured out all of his wrath on his own Son so that he might lovingly adopt you into his family.

You are now a part of the people of God. You have Abraham as your father of faith. You, through faith in Christ, have been grafted into the lineage of the David who killed Goliath. You both have a great heritage and you have an incredible future. Through faith you have overcome the world and one day you will inherit the whole earth and even judge angels. What you have been called to is no small thing.

We do nothing to earn this standing in the family of God, but once we are there, we are called to greatness. We are called to live up to the calling to which we have been called. It is both a great honor and a great duty. As Paul said to Timothy,

You then, my child, be strengthened by the grace that is in Christ Jesus…Share in suffering as a good soldier of Christ Jesus. No soldier gets entangled in civilian pursuits, since his aim is to please the one who enlisted him. 2 Timothy 2:1,3-4

You are a soldier who is called to not get caught up in the glitter of this world, but instead you are called to live to please the King who saved you.

So, Kaden, I call you, as a son of the God of the universe, to greatness. Specifically, I call you to strive towards five things as you begin your Christian walk. I call you to:

Love like you have been loved.
Your Savior Jesus left Heaven to come down and serve the unworthy, and you are called to do the same. You are first called to love the Lord with all your heart and how this manifests itself is by you loving his image bearers, and especially his church. You know that you will always be walking in the will of God if you are loving God and the people around you. Pray daily that the Lord will help you to love and may love be your motivation for all that you do. Pray for others, give to the needy, bear with your siblings, forgive others, and bear their burdens.
Discipline yourself for the purpose of godliness.

You are at the beginning of your Christian life, but the King has many plans for you. He wants to grow you and make you into the image of his beloved Son. And how do you grow? Jesus answers this question in John 17:17 when he said, “Sanctify them in the truth; your word is truth.” The way in which we are made more holy is through the knowledge of and obedience to the Word of God. So Kaden, train yourself to be in the Word-to read the Bible, listen to sermons, memorize the Bible and share it with others. This depends on you Kaden. Religious zeal is something value, but what ensures godliness is a perseverant, get-up-when-you’re-tired-to-read-the-Bible faith.

“Train yourself for godliness; for while bodily training is of some value, godliness is of value in every way, as it holds promise for the present life and also for the life to come.”

Be determined now Kaden that you will discipline yourself to pursue God through the spiritual disciplines: through Bible intake, prayer, fasting, communing with a local body of believers, giving, and so on. This will mean coming in from playing to do family devotions. It will mean going to bed early so you can wake up early enough to read the Bible. It will mean praying for others even when you yourself are having a tough day. If you live a life committed to the spiritual disciplines, you will become like the King who gave his life for you.

Do not love the world.

“The cares of the world and the deceitfulness of riches and the desires for other things enter in and choke the word, and it proves unfruitful.” – Mark 4:19

Kaden, the Lord gives good gifts to us in this world, but also know that these good gifts can choke the word of God right out of your life. You have been adopted into an American family and culture and in that, there are many, many dangers. The greatest danger is that you will have the opportunity to live a wealthy life. Kaden, keep giving away your things and use what you have to invest in the Kingdom of God and then you can rest assured that the Word of God in you will not be choked out. Be very weary of entertainment and ease. It deadens the soul and deafens our ears to the cries of the suffering. You will live in the palace of the King forever. Store up your treasures there through investing in the “least of these” now.

“And you, who once were alienated and hostile in mind, doing evil deeds, he has now reconciled in his body of flesh by his death, in order to present you holy and blameless and above reproach before him, IF indeed you continue in the faith, stable and steadfast, not shifting from the hope of the gospel that you heard.”

Kaden, many will say, “Once you are saved, you are always saved.” This is not an untrue statement, but it is incomplete. Based on the above verse, I am persuaded that we should say, “IF saved, always saved.” I encourage you Kaden to prove your salvation through your life. Prove that you know him. Prove that you are a child of the King. Prove that the Holy Spirit lives in you. Continue in the faith without wavering. Everyday remind yourself of the Gospel and cling to it.

Strive to change the world.

“Therefore, I say to you, whatever you ask in prayer, believe that you have received it, and it will be yours.” Mark 11:24 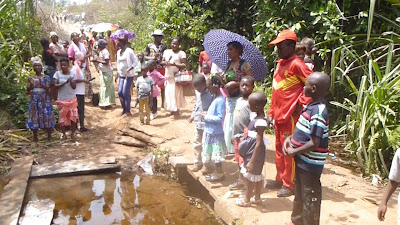 Kaden, we are to pray that God’s will would be done on earth as it is done in Heaven. And there is no poverty in Heaven, so may we pray that there would be no poverty here. There is no violence in heaven; therefore we should fight against violence here on earth. There is no corruption; there is no abortion, no terrorism. So, let us pray against and let us open our mouths and fight against the sins that grip this world so tightly. Kaden, speak for those who cannot speak for themselves. You are intelligent and you will be educated, therefore you will have opportunities that most of the world could only dream of. Use this privilege to help others Kaden. We serve a limitless God so when you see the world’s problems, don’t feel as if they are too big to tackle.

There is nothing too difficult for this God and if he can use a little shepherd by to kill a giant, he could use to end abortion in American. He could use you to end corruption in Cameroon. Maybe God will use you like he used Daniel who was put in a palace to speak the truth of who God was in the ear of pagan kings.

Do not listen to people when they tell you that it is too hard to change the world. There is NOTHING impossible with God and he loves to use average people like you and me to accomplish great things. Dream big my friend. You serve a great big God.

I love you with all my heart Kaden,