This past week has been both exhausting and exciting.

About a week and a half ago, Dave and I realized that the construction of our house was moving way too slowly and that we needed to be on site to supervise the progress. Thus we moved into the bush to a little camp that is about 15 minutes away from our soon-to-be house. Although we miss living with our Cameroonian roommates, we think this has been a good move. For starters, we are living in a more isolated location and thus do not have people around our house watching our every move and I do not think I have had anyone holler anything inappropriate at me for about a week now. It has been a refreshing change.
﻿﻿

Besides the move, this week has been exhausting as Dave and I have been working hard on our house under the hot African sun. We have shoveled dirt, determined what furniture to have built, and have done a lot of supervising. It has been very physically exhausting but we are excited to see some progress. The most difficult aspect of being on site has been having to hire local workers, negotiate wages, and encourage them to work harder. We are still learning (Cameroonian) French and we know close to nothing about the culture here and thus we often say something to a guy just to have him stand there are stare at us…So, now what do we do?
﻿﻿Working side by side with these guys is a way to once again “be baptized by fire” as we try to understand this new world. Another difficult thing is that in the US we have an 8 hour work day, with very defined breaks.  Here, on the other hand, the line between hanging out and working is very fuzzy and often I wonder if the norm is lively conversation with some work in between. It’s necessary for a worker to do his job, but when is his conduct laziness and when is it just due to the fact that efficiency is not as much as a value here? These are some of the struggles that we’ve faced this week.

Welcome to the Neighborhood

As we are shoveling dirt with guys and kids from our neighborhood, we are learning some of the Bakoum greetings. In fact, when we greeted a neighbor a couple doors down in French, he corrected us in saying that French was not welcomed in their “Bakoum speaking” neighborhood. I guess it’s time to move onto language number two! This is actually very reassuring to us because if the language is continually used and if there is a sort of identity and pride found in it, chances are the people we really “own” a Bible in their own language. At least, this is our prayer.

However, this is going to take a work of God. For instance, another neighbor approached Dave the other day and said that Christianity was not welcomed in the neighborhood. Little does he know that he is actually living in a village that the Christian God owns and that we he gave us “permission” to do his work there. We are praying that the Lord would save this gentleman and many more like him.

The Kids at School

﻿Probably the biggest change that has occurred this week is that we enrolled the kids in a public preschool about a 20 minute walk from our new house. We have been praying about this for some time, and we are happy to say that it looks like the Lord has answered our prayers. The kids LOVE their new school and are very happy there. Well, Kaden cried the first day and said “I want my mommy” all day (isn’t he the oldest child?), but besides that, everything is going well. We had three reasons why we wanted to put them in school: we want them to keep up their French, we want them to make friends, and we would like to have more freedom to work on language learning. And it looks like all these things are happening. All their teachers even say that they are bilingual and that they are having no trouble understanding what they say. ﻿
﻿﻿ 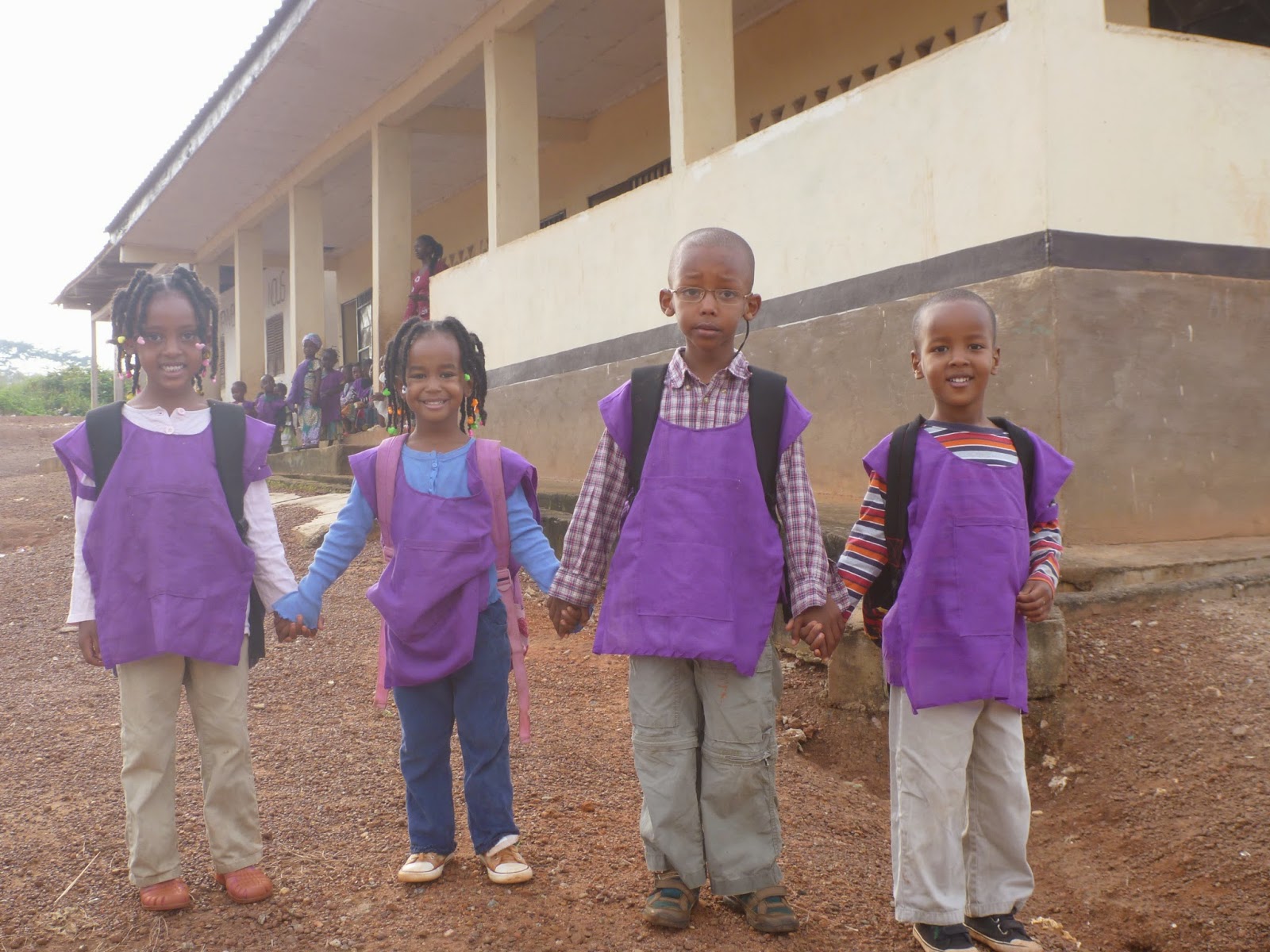 However, the school is definitely different then what we would be used to in America or in France. There are around 50 kids in each class with only one teacher; there are no toys, games or activities, but instead just a lot of children and a big chalk board. The kids go to the bathroom either in the field next door or in a hole in the ground…and our kids have reported that they don’t wash their hands…not exactly ideal. On Friday the kids came home and said that they did not learn or do anything but that the teachers talked the whole time while the kids just hung out. Makyra told me that the others just sat there but that the four of our kids “made rap music” and danced the whole time. That is another great difference: the kids at the school are considerably smaller then our kids and do not seem to have much energy. Or maybe we just happened to adopt the four loudest, most energetic people on the planet…that must be it. It was also surprising to have Kaden come home and say that a doctor came to their school and gave all the children an oral polio vaccination and vitamins. We are not against the vaccination, but I just assumed they would ask us first. And what else is funny is that although the director told us that the teachers to not use corporal punishment in the classroom, our children tell us otherwise as Elias has already gotten several spankings (but he said he deserved them). So, the school experience is a bit different and a little shocking some days, but in the words of Kaden, “even if the teachers don’t teach, they still take care of us.” So, as long as the kids are happy, learning French, safe, a
﻿﻿nd making friends, we’ll count this school as a blessing. And for those of you wondering, we are still doing homeschool with them in English in the afternoons. And yes, this makes for a LONG day!

To our Praying Friends
We cannot start full-time language study until we are moved into our house. Will you please pray that we will be moved in by November 11th?
Please pray for Elias – that he will love wisdom and instruction and not despise it. Pray that he will learn self-control in every area of his life.
Pray for our kids at school- that they will continue to make friends, speak French, and be safe and happy.
Pray for the Bakoum people – that God’s Kingdom would break into this people group.