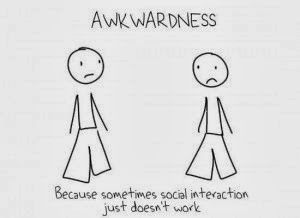 There are hundreds of unspoken social rules for every society and when these cultural rules are broken, awkwardness ensues.

Here are some examples of cultural rules that might be easy to violate:
-> Crossing your legs in Cameroon communicates that you feel superior to those in your presence.
-> Our son Kaden came home from school the other day sticking up his middle finger. Although I could not tell him the “why” behind the social rule, we explained to him that it was very rude to make that gesture in American culture.
-> In some languages (like French) it is important to use the “formal you” when addressing someone for the first time and if you do not, it is considered impolite. Dave has a tendency to completely reverse this process and be overly formal to friends while offending our children’s teachers.

And when these unspoken social expectations are broken then comes the awkwardness. Everyone has broken some social rules and if you have ever spent time in another culture, you may perpetually feel and actually be considered awkward. And yet, the Gospel applies even in these painful situations. For instance:

1. God Looks not on the Outward Appearance but at the Heart

People judge by actions and social competency and yet God judges the heart. A person’s motives for saying all the right things at a party or on Facebook may be so that other people think he is cool. Or, in church circles, a person may use all the right lingo to create an image of holiness. And yet, it is the Lord who weighs the motives of the heart. The Lord is not impressed by our trendy hairstyle, or our expensive handbags, or our witty use of obscure movie lines.

Contrarily, the Lord is “impressed” by a broken spirit and a contrite heart. God looks to the one who trembles at his Word, who accepts his Son, and who tries to love other people, even if it comes out awkwardly sometimes. Psalm 51:17 says that God will not despise the person who is broken before him, who is humbled by their sin. One’s own culture may despise someone for being socially inept, but when the socially awkward person remains humble before the Lord, he will be the exalted one in God’s coming Kingdom.

2.  God Chooses the “Awkward” to Shame the Wise

Not only does God accept the humble yet socially awkward person, but he actually intentionally chooses to fill up his kingdom full of awkward people. He chose those who are not of noble birth, who are insignificant in their cultures, who are “nothing special” to be a part of his kingdom. Why? So that when this host of “no ones” faces him they will not expect to charm him with the cultural know-how, but will instead bow the knee in humility. And then the great reversal will happen: the insignificant of this world will rule over those who were so great by the world’s standards that they failed to see their need for a Savior.

As this applies to missions, I can envision a North American family moving into a remote village in the Middle East. The wife of this family, although desperately trying, just cannot get the language. The house they build, although extremely modest by their standards, offends the nationals because it is too lavish according to their culture. What’s more, the handful of local believers are upset because the missionaries unknowingly participated in a ceremony devoted to the worship of a false god thinking it was just something cultural. Oops.

And then, there is one person who converts to Christ and all the village is confounded wondering why this individual would seek to follow the God of the awkward, unable-to-speak-their-language foreigners. Clearly, the only reason is not because of the greatness of the missionaries, but instead because of the greatness of the missionary’s God. Kingdom advancement happens through awkward people.

“But as it is, they desire a better country, that is, a heavenly one. Therefore God is not ashamed to be called their God, for he has prepared for them a city.”  Hebrews 11:16

So, for the time being, let us seek to use those times of awkwardness to remember that the Lord does not reject the humble, even if that humble person is rejected by his friends. Let us remember that the very shame a person endures will somehow be used to bring shame to the culturally astute unbeliever.  And finally, let us consider those times when we just want to disappear to be just another way that we are groaning for redemption.