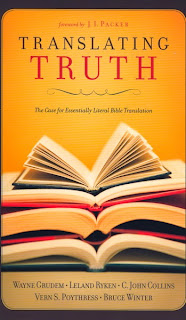 As mentioned in my last post, I read through Grudem’s essay “Are Only Some of the Words of Scripture Breathed Out by God?” this week. The essay can be found in the book Translating Truth: The Case for Essentially Literal Bible Translation. Thanks to Dr. Jim Hamilton and Crossway for uploading this chapter online.

As a budding Bible translator I found his article to be very thought-provoking and helpful. It is also not overly academic and quite understandable. The article is written in defense of Bible translation that focuses on translating “every word” (the essentially literal translation method) over and against what is called “dynamic equivalence” which seeks to translate “thoughts.”If you are a pastor or a layman that loves the Bible, it is very helpful in thinking through the Bible translations you have on your shelves. That said, I would like to discuss some aspects of this essay that I agree with as well as a couple of disagreements.

2. The Strengths of Essentially Literal Bible Translations in English
Grudem comments that he would not be able to teach his classes, preach sermons or memorize Scripture with dynamic-equivalent translations such as the The Message or the New Living Translation. However, he goes on to say, “I could readily use any modern essentially literal translation (especially the ESV, NASB, NET Bible, and HCSB) to teach, study, preach from and memorize” (p 49, 50). Throughout all of our Bible training at Master’s and SBTS we have been consistently impressed by the reliability of these translations. In fact, I would say that one of the main things I have learned through studying the biblical languages is that (what Grudem calls the ‘essentially literal’) Bible translations do a much better job translating the text of Scripture into English than I could. They are faithful to the text of Scripture and I could not recommend them more highly.

3. The Usefulness of Paraphrases (in the Right Context)
In dialoging with a friend about this article before I read it all the way through I tried to communicate what I later found already communicated by Grudem:

What then can I do with dynamic equivalence translations like the New Living Translation or The Message? I can read them like I read a commentary, not thinking of them as exactly the Word of God, but as a fresh and creative way to convey an explanation of the verse or an interpretation of the verse as understood by some very competent evangelical scholars. I think of these versions as skillful free interpretations of Scripture, but not strictly as translations (p 50).

I think this is dead on. There is value in paraphrases, but it is the same value you can get from a commentary or a sermon. They are not in and of themselves the text of Scripture, but an explanation or commentary on the text of Scripture. Therefore they contain thoughts not present in the text of Scripture and lack ideas that are in God’s Word. Like the sermons we hear on Sunday they can be very helpful in gaining perspective on a text, but they need to be judged and weighed by more literal translations.
Disagreement
1. An Over-simplistic Argument
Grudem’s approach is to start seeking to make a word-for-word literal translation and “depart from complete literalness only where it is necessary, in cases where a truly literal translation would make it nearly impossible for readers to understand the meaning or would hinder communication of meaning much more than it would help it” (p 24). I appreciate this perspective which is clearly different than those dynamic equivalent translations who do not seek to preserve the words of the original texts as a primary goal. However, I believe that there may be many (perhaps more than Grudem would believe) situations in which complete literalness does not yield “good English.”
As an example, in French class the other day our teacher told us that often when people are learning to speak French they will think of the way that you say something in English, and then just translate it word-for-word into French. She told us that we are missing a step. First we need to think of the phrase in English, then think “How would the French say that?” and then say it like the French. For instance, in English we would say, “I am going to pick up my children from school.” While you can say this exact phrase in French, it would not really make sense to French ears. That is because they do not “pick up” kids at school, they “search” kids at school. The confusion works the other way, because to translate this into English directly (literally) I would say, “I am going to search the kids at school.” In my mind I would envision having my kids place their hands up against the wall and patting them down for weapons or drugs. Instead of a direct translation, you have to think “How would the French say that?” This involves selecting a different verb, not “pick up” but “search”.
Similarly, Grudem mentions in his essay that he believes that it is right to translate the Greek word splagchna as “heart” in English because that is the only way that it would make sense to the English speaker. This is practicing the linguistic principles that I learned in French class. And it does not mean that Grudem does not value every word of Scripture. It just means that he is trying to “produce a translation that brings over into English as much of the meaning of the original text as possible within the constraints of good English today.” It seems that some conversations within English Bible translation, though, are not in the context of “How much of the Bible is inspired?” but instead “What is good English?” The difficulty in this aspect of translation, even within the “essentially literal” translation method was greatly downplayed in this essay which added to my second critique…
2. The Excluded Middle
I do not believe that translators need to choose between translating like the ESV and translating like The Message. I believe that one can start with the biblical assumption that all of the words of the Bible are inspired and come out with a translation that is more dynamic than literal yet not a paraphrase. This is especially true when you move away from speaking about English translations. According to a brief Internet search the English language has approximately 250,000 distinctly English words. French only has around 43,000 words! From what I have read, most of the world’s smaller languages have remarkably fewer words than French. It seems English Bible translators are a bit spoiled. I have a feeling that when we arrive we will be forced to do more “dynamic equivalence” just based on the lack of vocabulary. This does not mean we will discard the words of God, or hold them as less inspired. But our goal is to produce a translation that brings over into a Cameroonian language as much of the meaning of the original text as possible within the constraints of the language.
Conclusion
This article has spurred a whirlwind of thoughts that cannot fit into this blog article. So be on the lookout for more of these to come. Here are some topics I envision coming your way: What is the role of a Bible translator compared to a Bible teacher? What role do extra-biblical linguistic theories play in Bible translation? I would still love to hear from you as to places in the English Bible that you feel were translated well or poorly. I can see that being a great blog too. I look forward to thinking through these issues with you in the future.