Zoey Lindsay Salam Hare!
Meet 5 month old Zoey. Dave reports that she is crawling, yep crawling. Pretty incredible. Here is what Dave emailed to me about his experience with Zoey…

“She is soooooo cute. When I came downstairs I met her grandfather (Melese). Totally unexpected. I was able to talk to him for a little while, he was very nice. His daughter (Bogalech) had given birth to Zoey and brought her to his house. She then left and never came back. He does not know who the father is nor where she went. He was very sweet and wanted a picture to take with him.

Zoey is chill, but quite adventurous. She would not stay in one place. She laughed and laughed. I spent a few hours there with Zoey. It was so much fun. I love her. I was not sure how I would feel during all of this. But I feel so much love and joy.”

Zoey means “life” in Greek – looks like we rightly named this little one!

Salam (Zoey’s second middle name) is the name of a nanny who cared for her. We don’t want our children to forget those who took them in and loved them when they were just days old. 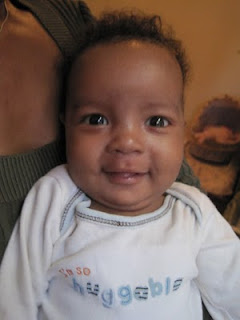 Meet 6 month old Elias. Dave had the opportunity to meet his mom today. He emailed me about his experience:

“She was very sweet and very young. She told me she was very happy that her son could go into a home where he would be taken care of. She blessed us. I asked the translator to ask her about his father. But the translator already knew. She had been raped. They did not know who the father was. It was quite a bit of news to get right at that moment. I cried. I am so happy that we can adopt a boy who was the product of rape. And I am so proud of her. She was really happy when she drove away because she knew we would take care of him. What a bold little girl. I asked a few more questions and hugged her. She left.”

We praise the Lord for the selflessness of Elias’ mother and for bringing something beautiful out of such an awful crime. He is no less made in the image of God because of how he was conceived and we love him to death already.
Ewenetu (Elias’ second middle name) is the name of a Christian man who started an orphanage there in Ethiopia. He has lovingly cared for Kaden and for these two kids.
“To you the helpless commits himself; you have been the helper of the fatherless.”
– Psalm 10:14b
The Ethiopian courts just today declared these children to be ours and if all goes as planned, we will be returning to Ethiopia in six weeks to bring our kids home with us.Check out the new album on our family blog for more pictures: http://newharefamily.shutterfly.com/1135